For thousands of years, Whidbey Island was the ancestral homeland of numerous tribal bands who were the first to establish burial grounds there. They interred their dead near water 's edge, and usually placed the body above-ground, the customary method of "burial" for Pacific Northwest tribes. When Canadian artist Paul Kane traveled through present-day western Washington in 1847, he painted several of these funerary sites and captured the rich symbolism of native burials. However, as whites began settling in the region in the 1840s, vandalism—and a strong missionary presence—forever changed how Indians cared for their dead. Catholic priest Francis Blanchet visited central Whidbey in May 1840 to minister to the Lower Skagit Indians and noted "much difficulty" in changing the Indians' burial customs. He lamented his inability to "give Christian burial" to his converts and observed "such are the chief obstacles which the spirit of darkness employs to retain those peoples in infidelity", an indication of the wide gulf that separated Indian and White ideals of spirituality. 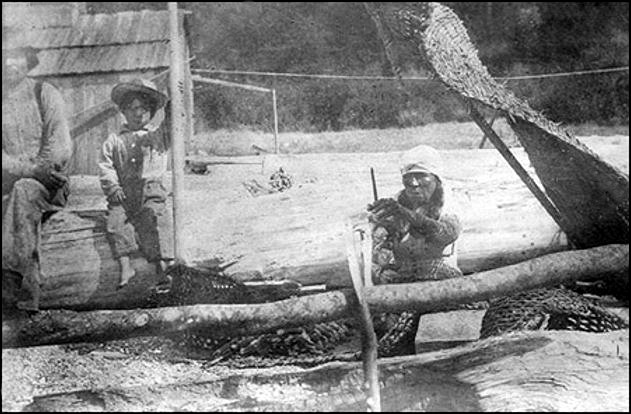 By the early 1850s, as whites began settling on Whidbey, Indian burial customs were in transition. Thomas Hastie, who came to the island in 1853, recalled, "Indians buried their dead sometimes in the ground but most often in canoes or chests up in the branches of trees." Within a decade, the Indians interred all of their dead below ground, often near the sites of their ancestral villages. For the next half-century the Lower Skagit Indians held periodic potlatches on Penn Cove, ceremonies that included ritual care of their burial grounds. The final recorded potlatch took place in April 1904, and there an observer noted that, "The greater part of the two-day celebration was taken up in unearthing the bones of the deceased, carefully and lovingly wrapping them in new blankets, placing them in new casket, and [re-burying] them." Thereafter, Whidbey 's Indian graves sites made news only when they were vandalized [not a rare occurrence], or were discovered as new structures were erected on the island. A small number of Indians were buried at Sunnyside along the western fence line where, in accordance with customs of the time, they were segregated from the general cemetery population.