The 1912 Cemetery Association, begun by the Ladies of the Round Table [LORT], lasted but a short time and disbanded after several attempts to clean Sunnyside. By 1919 the community was not even observing the annual Memorial Day ritual and the cemetery disappeared from the public agenda. But in 1922, Sunnyside's "ill-kept littered condition [and] prominent rubbish heaps" prompted LORT to try again. It publicly encouraged lot owners—and Island County Commissioners—to join forces and address the cemetery's "deplorable" state. The Island County Times joined the "clean cemetery" campaign and promoted the formation of a new cemetery association, one that would keep the cemetery "continuously in excellent condition." On July 2nd a public meeting was held at the Island County Courthouse that initiated a different direction for Sunnyside. A new cemetery association was formed and Island County officials hired one individual to oversee the cemetery: William "Billy" Sherman.

Billy Sherman came to Whidbey Island in 1896 with his father, Henry, and four years later wed Lottie Black. Together they raised ten children on their "Scenic Crest" farm, located just north of Sunnyside. Sherman was the logical answer to Island County's search for a cemetery sexton [caretaker.] Prior to 1922, he and his sons, Clark and Wilbur, had dug many a grave at Sunnyside, an arduous task that they performed by hand for just $5.00 [a fee that had remained stubbornly consistent since 1876 when one laborer had tried—and failed— to raise the grave digger's fee to $10.00.] That rate did not change with Billy's appointment to cemetery sexton, but after 1922, Island County paid him an additional fee of $50.00 a year for overseeing the cemetery, selling grave lots and performing minimal maintenance. Assisted by his sons, Edwin and Raleigh, it was a job he performed until shortly before his death in 1960, at which time Edwin assumed his father's position as sexton. [Sherman, and much of his family, are buried in Kellogg's Sunnyside plat, just south of the Davis Blockhouse.] 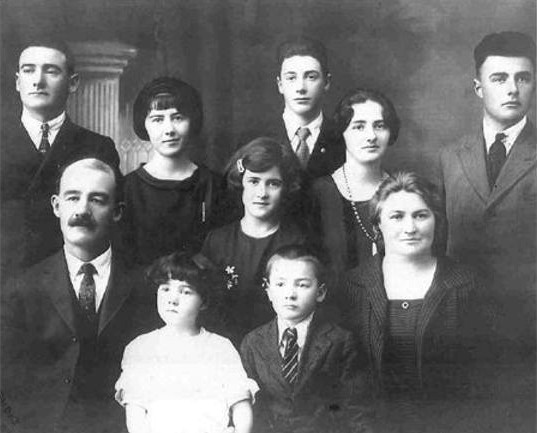 As the twentieth century advanced, descendents of the original pioneer families died out, or moved from the island and their property was sold to newcomers who usually insisted that any private burial grounds on the land be removed. In the course of exhuming those "farm cemeteries," the remains were usually moved to Sunnyside. [By examining the dates of death on cemetery markers, and comparing them to when that respective section of Sunnyside Cemetery actually began, it is possible to ascertain which graves were moved from these private cemeteries.] Conversely, graves as Sunnyside were sometimes exhumed as families moved off-island and wished to reunite their loved ones in cemeteries far from Whidbey Island. In 1921 the Island County Times reported on one such transfer when Lillian Butters Kellogg had her mother-in-law exhumed from Sunnyside and brought to Seattle "to be buried beside other relatives."

In 1931 Island County Commissioners expanded the cemetery for the fifth time in its sixty-five year history when they purchased one acre from the widow of Win Cook. The Blockhouse Addition to Valley View Cemetery came from the original James Davis claim purchased by Cook's parents in 1865, but there was more to the purchase than just additional burial space. The acquisition had been prompted by the Ladies of the Round Table, who had been working since 1922 to preserve the historic Davis Blockhouse on Win Cook's farm. In 1931 they finally succeeded in stabilizing the structure and, needing an organization to permanently care for it, they turned to Island County. The county agreed to take charge of blockhouse and simultaneously adopted it, and added more land to the cemetery, for $230.00—a bold move given the financial straits of the Great Depression years. That September, as LORT dedicated the newly preserved blockhouse with a community celebration, the Island County Times announced, "The old Davis Blockhouse, relic of early pioneer days ... was sold to the county last Tuesday to become a part of the county cemetery grounds, thus assuring perpetual care of the famous fort."