By 1865, when Mary Bozarth began the "Ebey Grave Yard on the Hill," numerous private cemeteries dotted the farms of central Whidbey. Those sites did not help Island County officials however, when confronted with their duty to bury indigent residents without property, or drifters who died within the confines of the county. Each time that occurred, the then-appointed coroner dealt with the problem in a seemingly different way, choosing burial sites near the Hill Harmon house [895 Ebey Road], or an unoccupied point of land on the island, or burying the deceased wherever they were found-a decision in which the ethnicity of the victim often played a deciding factor. By 1868 enough random grave sites had accumulated on the island that county officials were forced to address the problem.

They found their solution in the generosity of Mary Ebey Bozarth. Since burying her brother, Winfield, Bozarth had allowed a number of friends and neighbors to inter their deceased relatives on her land overlooking Ebey's Prairie. During the 1868 autumn session, county commissioners approached her about using her family's burial ground for their first public cemetery and Bozarth agreed. On April 6, 1869, she sold the one and a quarter acre plot to Island County for $1.00. Thereafter, county records referred to the burying ground as the "County Grave Yard on the Hill".

Mary Bozarth hath for the best interest and welfare of the said County of Island, and of the public thereof, and in the further consideration of one dollar to her paid by said county ... hath given unto the County of Island, to be used by said County as a burial ground and to be kept and used for no other purpose whatever by said County, all that certain parcel of land situated on the northeast corner of what was known as the Jacob Ebey Donation land claim, and now owned and occupied by the said Mary Bozarth.

Five years later, the first expansion of the cemetery took place, albeit as a for-profit venture. In September 1874, Dr. John Kellogg of Whidbey Island purchased the two acres from Bozarth that adjoined the former Ebey Grave Yard on its western edge. Kellogg and Bozarth were old friends, both having come to Whidbey Island in 1854. He had tended her family members during many an illness and was renowned throughout the region as the "Canoe Doctor" for his mode of travel in reaching far-flung patients. It was Kellogg, in fact, that Northern Indians sought in August 1857 when they came to Whidbey Island. They had hoped to kill a man of his stature in reparation for their leader's death the previous November at Port Gamble. But Kellogg was gone from the island at that time, and the Kake Indians chose Isaac Ebey instead, a well-known political figure in the lower Puget Sound region. 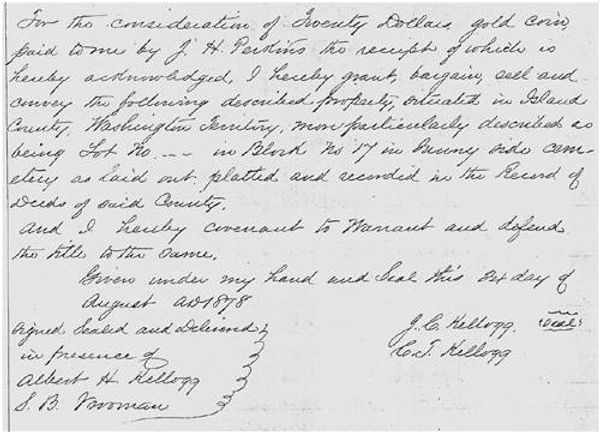 On April 6, 1875, six years to the day after Bozarth sold her family burial ground to Island County, Kellogg officially recorded the deed of sale for his new land. He had the land platted, [although Island County would not record that document until 1891], and began selling cemetery lots, each containing eight graves, for "twenty dollars gold coin," sales that were recorded in the Island County deed books. And in remembrance of the family who first owned the land, Kellogg named his new cemetery "Sunnyside". In 1879, the last member of that family came home to Whidbey. Sixty-one-year-old Mary Ebey Bozarth died at her daughter Almira's home in San Francisco and in late June, she was laid to rest in the burial lot she created on her parents' farm in 1865, thereby fulfilling her wish to "at last be buried by my parents, brother, and sister."

The remains of Mrs. Bozarth, sister of Col. Ebey, were brought up on the Dakota this week. Mrs. Enos, her daughter, was on board. The remains will be interred on Whidby Island.